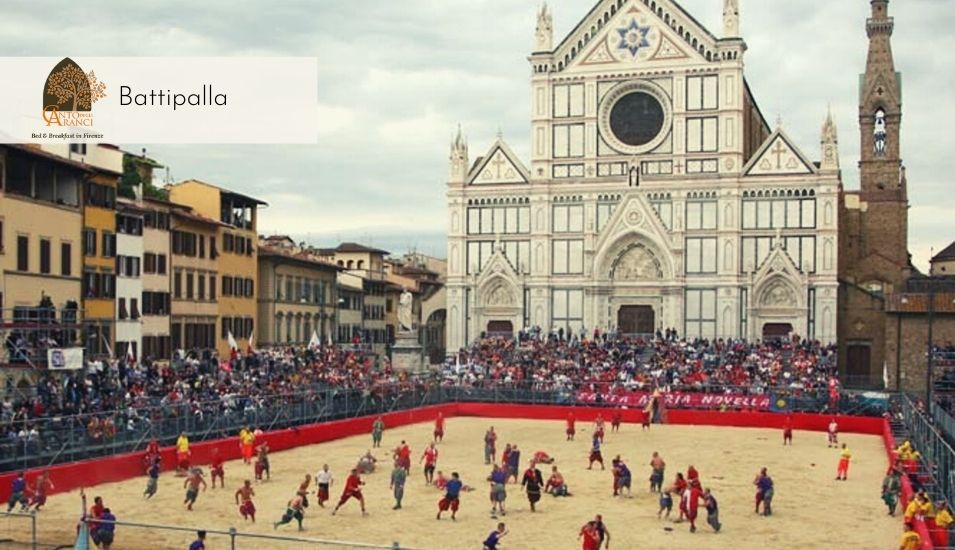 Posted at 08:54h in Curiosities of Florence by b-jou

If you stop to admire Palazzo dell’Antella on the right side of Piazza Santa Croce, you will notice right away the elaborate decorations and curious details of the windows that get closer and closer together as you approach the Basilica of Santa Croce, creating an optical illusion of perspective that makes the building seem bigger. Few people notice the little marble disk that is found on the façade of the palace between number 19 and number 20, and even fewer notice a similar disk on the building on the opposite side of the piazza at number 7. The two marble disks are different: the one on Palazzo dell’Antella is decorated with three colored spheres in white, red and green that overlap and carry a date in Roman numerals: February 10, 1565. The other is more simple, divided into four parts colored red and white, without any writing. They are facing each other, but they are not just decorations, nor do they recall or celebrate people or events. They are called ‘battipalla’ and for over five centuries they have been on these walls for a very precise purpose: to allow the Florentines to play soccer. A Historical Passion

Soccer has been a very widespread and popular game since the Fifteenth Century in Florence. The backdrop to the games were the streets and piazzas of the city, and the players were mostly young men from the noble families. Even the Medici family counted soccer players among its members, including Piero II the son of Lorenzo il Magnifico, and the Grand Duke of Tuscany, Cosimo I. Also Giulio and Alessandro de’ Medici took a stab at soccer before becoming Pope with the names of Clement VII and Leone XI respectively, as well as another Pope, Urbano VIII, Maffeo Barberini. The most famous match took place right in Piazza Santa Croce on February 17, 1530, during the siege of Florence on the part of the Spanish Emperor Charles V, in mockery of the enemy troops.

Thanks to its size and regular shape, Piazza Santa Croce became the place where the soccer games were held. To mark the centerline that divided the field of play, in 1565 two marble disks were placed on the walls of the façade of Palazzo dell’Antella and the one facing it. But they also had another function: the referee would throw the ball against these disks to start the match. This is why they were called ‘battipalla’ or the ball-hitters. The Historical Florentine Soccer Game (Calcio storico fiorentino) is still played in Piazza Santa Croce every year in June, on the occasion of the feast day of Saint John the Baptist, the patron saint of Florence. And the two battipalla are still there, facing each other, even if over time they have lost part of their function. To start the match, the ball is no longer thrown against the disks, but onto the dividing line. They do still mark the middle line or ‘mezzeria’, as they did 500 years ago. And they still watch the heart-felt soccer games among the four quarters of Florence.

We love the Historical Soccer Game and “Battipalla” is the name of one of our rooms. If you like it, reserve!

Check availability now for one of our stunning rooms!